Dyna-Tek SLICKSHIELD™ for Corrosion and UV Protection of Marine Watercraft

Dyna-Tek SLICKSHIELD™ for Corrosion and UV Protection of Marine Watercraft

Some of the first areas of a jet ski to exhibit the corrosiveness of salt water are the electrical components such as the starter solenoid relays. To provide a simple test to show how a stock (after-market) starter with zinc-plating would compare to a SLICKSHIELD™ coated version of the same model, we ran a 200-hour salt fog test using the parameters of the ASTM B117 standard https://en.wikipedia.org/wiki/Salt_spray_test. Below are two after-market Starter Solenoid Relays.
The one of the LEFT is straight out of the box while the one on the RIGHT was coated with SLICKSHIELD.

At the 48-hour mark, the out-of-the-box relay (LEFT) has begun to show noticeable signs of corrosion and the SlickShield coated relay remains unaffected.

Close-up pictures of each at 48 hrs…

The Salt Fog lid was closed again and testing resumed.

At the 200-hour point, both Starter Relays were pulled from the Salt Fog Chamber for evaluation. Close ups of each Relay showed that significant white corrosion had taken hold on the surface the uncoated part.

After the initial pictures, we clean each part with warm water and a soft linen towel. The purpose of this is to remove as much of the zinc oxides (white) that have built-up on the parts to better see the corrosion underneath it. The excessive white oxide build-up can often be due to the quality chromate in the zinc plating. All zinc plated parts are chromated to protect the zinc. (As a matter of perspective, a high-quality zinc plating can typically last up to 300 hours before exhibiting white rust.)

This produced the following picture: Disclaimer: This test was merely an initial trial to show the differences between coated and uncoated Starter Relays between the selected parts. There was no additional data collected prior to or after the testing to better qualify the results of the test.

The testing that has been done to date under more controlled testing parameters has produced over 1,000 hours of salt fog results before initial signs of corrosion occur. Salt fog testing isn’t a test that translates into real world metrics that can be quantified, but it does present a fair playing field for testing the legacy finishing solutions that make up the status quo in the marine watercraft markets. 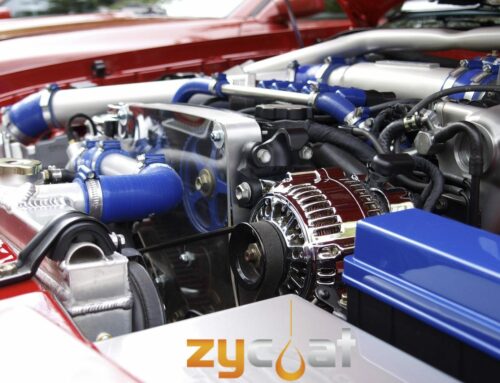 How to Avoid Product Build-Up on your Industrial Cutting Blades